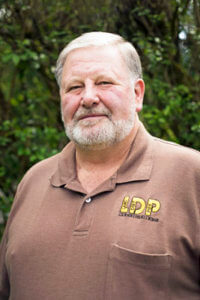 Jerry is the patriarch of the Perkl family and grew up in Lincoln, Montana. He attended high school in Helena and also attended the University of Montana. He started his career in mineral exploration during his early years. Jerry’s earthwork and excavation experience started in 1975 with Project Development, an excavation company based in Helena.

In 1982, Jerry relocated to the Seattle area doing land and plat development along with building sewer and septic systems. Jerry also holds a u-fire line license as well. He then worked with a Lynnwood/Seattle-based excavation and development company, worked with C-Martin Trucking, and also served as a project manager and estimator for Gott spanning fourteen years. In 2004, Jerry again caught the entrepreneurial bug and joined an excavation company in Lake Stevens, WA, and then joined Nolan in 2009, the offshoot of what Land Dirt Pipe Construction is today.

Jerry and his wife Theresa, who have known each other ever since elementary school in Montana, were married in 1977 and have lived in Lake Stevens since 1982. Two of his three sons now work in the business. Jerry loves entertaining and spending time with his six grandchildren. He also enjoys attending sporting events, especially Seahawks and Mariner games. A former Lake Stevens Citizen of the Year, Jerry was President of the Lake Stevens Junior Athletic Association for nine years and led Club, Inc., a partnership between the Lions Club and the Lake Stevens Junior Athletic Association.

His business focus has always been freely giving his knowledge to customers helping them reduce costly mistakes, attention to detail to optimize quality of work, and adherence to timely scheduling to prevent delays. Jerry has also maintained a 40+ year relationship with area developers and municipal water and sewer districts. 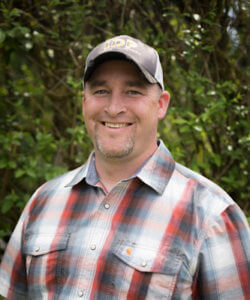 Originally from Lake Stevens, WA, Nolan has worked in excavation with or for his dad, Jerry, since elementary school.

Having grown up in the area, he has a unique understanding of the terrain, plant and timber material, soil conditions, and weather that can affect excavation and site preparation in western Washington and brings a wealth of knowledge and experience to every project. Nolan gained valuable hands-on industry experience as a general laborer, pipe layer, heavy equipment operator, foreman, site superintendent, project manager, and now owner of the company. In addition, he attended the College of Siskiyous majoring in business administration and serving as quarterback for the football team.

Nolan is very proud of the family-orientation of the business having married his high school sweetheart, Brandy, and raising two sons, Peyton and Tripper. Nolan coaches football, basketball, and little league baseball in his spare time and enjoys playing golf and entertaining friends and family. He is also a season ticket-holder for the Seahawks, Mariners, and Silvertips.

Nolan takes pride in building lasting relationships with both customers and employees and is honest and upfront in the way the business is operated. He believes in old-fashioned hard work, efficiency, and being productive and holds employees to the same standard. Nolan is also proud of the family orientation of the company, going the extra mile for customers, and the quality of work produced by each employee. 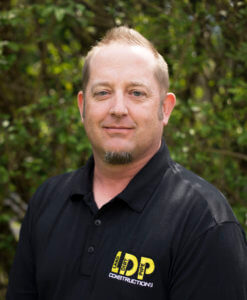 Having grown up in Lake Stevens, Eric attended Everett Community College and began his career in the earthwork and underground utilities industry as a laborer in 1990. After becoming a mainline pipe layer in 1992, he was promoted into a site superintendent role in 1994. In 1996, he was offered a position to lead a civil construction company into doing plat work where he gained the knowledge of how to negotiate, estimate and close out projects. In early 2005, he took a position with a prominent home builder in Snohomish county developing land into subdivisions. He gained a wealth of knowledge about entitlements and permit processes that the developers and builders had to endure in those few years.

In 2007, he returned to the previous civil construction contractor as General Manager and assisted in expanding their operation into commercial work. In 2015, Eric joined the LDP team as a Project Manager/ Estimator and was recently promoted to Operations Manager. Eric is responsible for ensuring that projects are completed on time and under budget while maintaining relationships with new and existing customers, securing subcontracts with our trade partners, and maintaining vendor and supplier relationships.

Eric enjoys attending Seahawks and Mariners games and watching his son, Ethan, play baseball. Married since 2002 to his wife Cheri, Eric also has one daughter, Haley. He attends church regularly and his pride and joy is Marisa, his 2008 Ford Mustang. 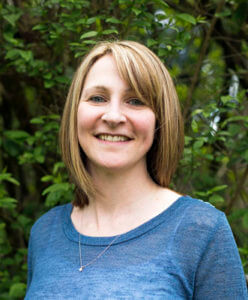 Rachel grew up in Wenatchee, WA, moved to Prairie du Chein, WI to attend high school, and returned to Washington after graduation. Rachel soon discovered her aptitude for math and numbers and decided to embark on an accounting career. Her accounting certification was earned at Edmonds Community College, which has led to accounting roles in both the construction and hospitality industries. She has also enjoyed prior success in the real estate industry. Rachel has been with Land Dirt Pipe Construction since 2013 and handles all accounting and finance for the company including payroll and human resources.

Rachel has been married for nine years to Nick Perkl, who works in the home building industry, and they have two young children that are their pride and joy. In addition to enjoying her family time, Rachel volunteers at her daughter’s school conducting field trips and participating in school events. She also enjoys cooking, attending Seahawks games, and experiencing the diversity of cuisine in the area. Rachel enjoys warm weather destinations and looks forward to more travel as the kids get older. 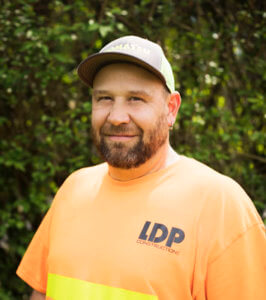 Andrew, who was born in Indiana and grew up in Stillwater, MN, serves as our Housing Project Manager. He maintains relationships with custom, tract, and multi-family home builders and developers to ensure projects are completed on time and under budget.

Andrew relocated to Everett, WA as a Petty Officer 1st Class with the US Navy and his prior service is truly appreciated. After being honorably discharged in 2003, Andrew began working with a large excavation company in the region as a general laborer working on primarily on Centex projects. He gained extensive experience and increasing responsibility in several key project areas including inspection, scheduling, grading, trenching, utilities, draining, foundation digs, earthwork, water, sewers, and drainage. In 2009, Andrew elected to work with a sheet metal fabricator in the aerospace industry, but decided to return to an excavation environment and joined LDP in 2014, originally as a labor/operator, and was then promoted to Project Manager.

Andrew enjoys being with his two children, Marnie and Sophie, and appreciates the family environment at Land Dirt Pipe. In his spare time, Andrew enjoys music and plays the acoustic guitar with a local musical group, playing for area charities including the Noah Foundation. Andrew believes that good organization and cleanliness on the job site is the foundation for doing quality work. 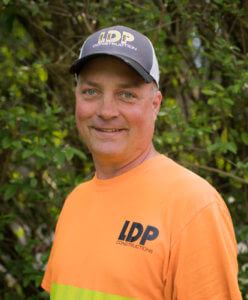 Having been part of the Land Dirt Pipe team since 2015 as a site superintendent, Jeff recently became our newest Project Manager.

In his younger years, he was an active motocross racer, grew up nearby in Woodinville, WA, and attended Big Bend Community College in Moses Lake majoring in aviation management. Most people don’t realize that Jeff earned certifications as a commercial and instrument-rated pilot and flight instructor. A former pilot friend introduced him to the underground construction industry in 1993, where he has remained ever since. Jeff gained considerable experience at a prominent excavation contractor in the area as a heavy equipment operator prior to joining LDP. Jeff is a stickler for cleanliness and attention to detail on each job site. He believes in good communication, efficiency, and quality of work on every project.

Jeff has been married for 19 years to wife, Kristin and has two children, Ashley and Lindsey, and looks forward to doing some traveling both domestically and internationally. 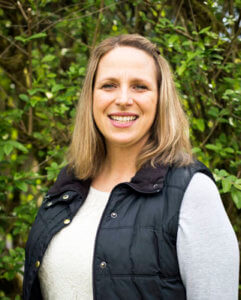 Amy has experienced a variety of roles in the construction business since 1999, including truck dispatching and controller, leading to a unique perspective and tremendous knowledge in the industry.

Being comfortable with numbers and orientation to detail, Amy once considered working in accounting and spent two years of college in that pursuit. However, with family obligations and relocation back to Washington State, she found her skill set to be a good match for construction industry. Originally born into a military family, she migrated from North Carolina to Santa Maria, CA, where she grew up, and ultimately settled in Marysville, WA with her husband and two children. Amy recently joined the Land Dirt Pipe team and handles bidding and estimating for plat, commercial, and residential projects.

Amy participated in a variety of sports in her early years and is an avid Seahawks fan. In addition, she and her family enjoy fishing, hiking, and camping and when time permits, an occasional trip to the Caribbean.